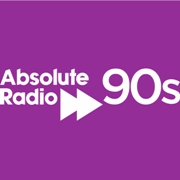 Absolute Radio 90s is a British station from London. It was founded in 21 June 2010. This channel owned by Bauer Radio Group and broadcasts mainly in 90s format.