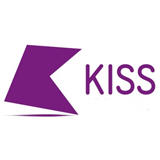 Kiss FM is a British digital radio station as part of Kiss Network and operated by Bauer Group Radio. It broadcasts mainly Rhythmic Contemporary (alsow know as Rhythmic Top 40) music. You can listen to the station through DAB digital radio, as well as on FM frequencies throughout the UK. The radio station began its history as a pirate radio in 1985. Radio Kiss received official status in 1990. Music shows are regularly broadcasted live under the direction of popular hosts such as Jordan & Perri, Omah, Tinea .

"The Beat Of The UK Radical Radio"